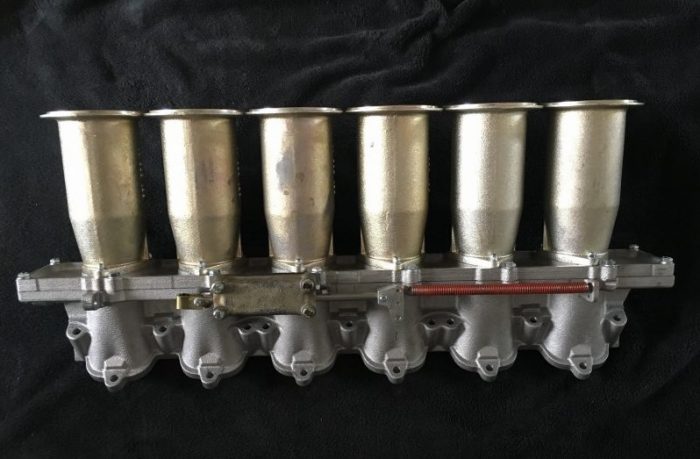 Ideal for wide open throttle performance and response, the lack of butterfly improves airflow. Period correct intake system for DTM cars. We would not recommend fitting these to a road going car, we have a set of billet shaftless throttle bodies more suitable to road going vehicles.
Available in 45mm diameter, unit bolts directly to the head without manifold. Standard injectors and MFI/kugelfischer pump can be used, we can suppy new or refurbished injectors, and the MFI pump needs to be supplied with more fuel from an electric Bosch Racing type fuel pump.

Individual throttle bodies can be found on many performance cars and most Naturally aspirated competition cars. The reason is they offer large improvements in throttle response and efficiency due to the reductions in pumping losses from atmospheric pressure being available for each cylinder rather than being forced to take a longer path through the inlet manifold runners. This is achieved by applying an individual butterfly for each cylinder rather than all cylinders sharing a single larger throttle body.

The result is a change in engine note and increase in volume whilst improving overall power levels and throttle response.

We also appreciate keeping the period correct looks is important for a lot of the classic cars and with this consideration we can cater with a range of throttle bodies which are designed to look very similar to the older Weber of Dellorto carburettors from the older era but with a modern injection system cleverly disguised inside the housing.

Runner length can be tuned with the trumpets which can alter the torque curve and peak HP. Each engine is different but generally speaking a high rpm engine will benefit from having shorter runners and a wider torque curve but less peak hp is achieved with longer runners. These systems offer the most improvements when matched with an aftermarket ECU. This gives finite control over all engine variables offering improvements in accuracy.

A lot of older cars are still running carburettors designed by Weber, Dellorto, Pierberg, Holley and others. Fitting a modern ECU allows better accuracy in your fueling and ignition systems. Electronic fuel injection can cater for any load, rpm, or altitude whilst monitoring air fuel mixtures it will always be adjusting parameters on the fly from its closed loop system. EFI systems are not subject to any fuel surge or frothing associated with floats and bowls in the older carb setups whilst also managing the extra g forces competition cars or modern suspension systems can bring to the fuel systems.

With this extra control the engine can run more efficiently and modern advances such as the ability to run an increased compression ratio without the risk of knock.

This is becoming a popular option to go with our throttle body kits. Road cars have given The system has a bad reputation based on poor throttle response in the OEM vehicles, a proper motorsport ECU and modern drive by wire unit a fast and accurate response whilst providing mappable throttle curves, throttle blips on downshift for sequential boxes and control of engine braking.